A 15-bagger without a single drill result - Garibaldi Resources (TSXV:GGI)

Sometimes you get the feeling that other people may have a lot more information than is publicly available when it comes to mining stocks.  A good example of that at the moment is Garibaldi Resources (TSXV:GGI).  The trading in GGI has been pretty wild the past two days, with the stock dropping 20% at the open yesterday and tripping a circuit breaker.  I thought that perhaps somebody got wind of results before they came out, but then the share price recovered the losses today and jumped 15% in the last 30 minutes of trading today.

Looking back a little farther, trading volumes in GGI suddenly exploded in late July 2017 and the stock has traded an average of 1.5 million shares per day in Canada over the past three months.  What changed three months ago?  On July 27, 2017, the company announced that "Widespread pyrrhotite-chalcopyrite mineralization has been identified on surface in gabbroic rocks that outcrop over a broad area at previously unexplored "Anomaly A", approximately 6 km north-northeast of the historic E&L nickel-copper-rich mineralized zones where drilling commences shortly."  Fair enough.  A potential new discovery in the hot Golden Triangle area of British Columbia should get some attention in this market.  But the run up in the share price and the market cap, which now sits at $232 million, has been nothing short of remarkable given the lack of details on the discovery to date and leave me wondering who knows what and if any people have taken a peak at the core.

On Sep. 1, 2017, the company issued a news release indicating that the first drill hole " intersected two long intervals of nickel-copper sulphide mineralization totaling 176 meters and consisting of pyrrhotite-pentlandite-chalcopyrite in the first drill hole..." and "Additional highlights of the first drill hole:
GGI stock popped from $0.70 to $0.94 on the news, which is reasonable.  But that is where things get strange.  In the same release that teased about good results from the first drill hole, the company announced that it had arranged a $6 million non-brokered private placement consisting of $0.65 units, which include a full 2-year warrant exercisable at $0.90, and flow-through shares at $0.75/share.  First of all, why rush to raise money if you think you have a great discovery?  To little old cynical me, this seemed like a "friends and family" style private placement with cheap stock.  The regulators also took issue with the timing of the PP and made the company revise the pricing to $0.82/unit and $0.92/FT share, which was still a great deal because the market price was $1.81 when the financing revision was announced.

The financing closed in two tranches on October 2 and 4.  Lo and behold, Eric Sprott had stepped up for $2.5 million of the placement.  Eric is a very smart and hard working man, so I'm not surprised to see him in the deal and view that as a positive sign.  On the flip side, the CFO sold 40,000 shares on Sep. 28 and a Director sold 50,000 shares on Sep. 6; I guess they couldn't wait for the assays.  But then, an insider bought 173,600 GGI shares yesterday, based on trades marked with the insider tag.  Now, I can only assume that the buyer must have been Eric Sprott, as surely all management and directors would be blacked out pending assays.

Speaking of assays, where are they???  I know labs in British Columbia are backed up right now, but I don't see how the assay results from a priority hole like EL-17-01 haven't been announced by now.  It has almost been six weeks.

Frankly, GGI has me confused.  The hot share price action and Eric Sprott's involvement suggest good things, yet the insider selling, delays in assay reporting, sudden surge in trading volumes and wild price swings raise doubts.  On top of that, the nickel market still sucks because inventories are too high and I don't like the mention of "disseminated sulphides" in the core of hole EL-17-01.  Disseminated sulphides usually mean low grades, which are not good in this part of the world because the terrain looks something like the image below.  Grade is definitely king in this part of the world. 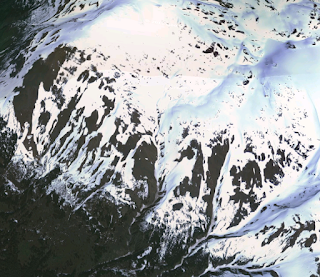 Investors are betting that GGI has something big at its E&L Project.  The stock is up 15-fold since July without a single drill result.  I'm the kind of investor who waits for assays...and I remain on the sidelines, very jealous of those who got in early!