After 7 weeks, reality bites and Garibaldi investors sell the news

First, my apologies for how quiet this blog has been for the past two weeks.  Most things in mining land have seemed very tame lately when compared to the rubber-necking we did on the horrific car crash that was West High Yield (TSXV:WHY).  My travel schedule has also been jam packed lately thanks to the stellar mineral resource estimate issued by Tinka Resources (TSXV:TK) and starting work for AbraPlata Resource (TSXV:ABRA), which has a ridiculously low valuation in the silver-gold sector because few people have ever hear of it (Disclaimer: I work for TK and ABRA plus I am long those stocks, so consider me biased on these companies and do your own due diligence).

Let's turn our attention today to Garibaldi Resources (TSXV:GGI), which finally released some assay results (link) from its E&L project at Nickel Mountain.  This company is likely giving us a real life demonstration of the life cycle of a mining stock, which as I'm sure you all know suggests that mining company stocks often hit their zenith during the exploration phase.  Pierre Lassonde came up with the conceptual life cycle of a mining company many years ago and Brent Cook has done a great job using it to explain stock behavior, but investors don't seem to learn.  The thrill of the lottery keeps them coming back, as evidenced right now by GGI (not to mention Novo Resources), and things usually don't pan out in the long run.  Based on my personal experience, I would say that most junior exploration companies fail to transition from exploration to mining.  As a result, the second hump in the Lassonde curve fails to ever materialize for most junior explorers. 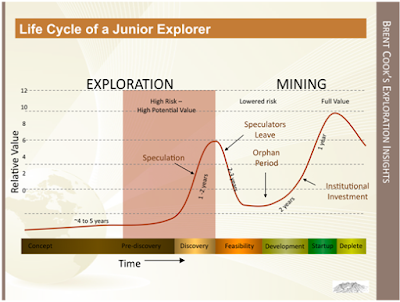 After waiting a mere seven weeks from the date the new discovery was announced (link), Garibaldi provided a piss poor news release that I would have thought would raise some questions from IIROC.  There are no assay tables and no drill hole collar info.  Instead, there is some good old fashioned grade smearing on hole EL17-04 and summing of intervals on hole EL17-01.  Best of all, there is a whole lot of arm waving about a drill hole EL17-14.  More on that later.

The highlight of the actual assay results in the GGI release was hole EL17-04, which hit 4.8m grading 7.2% Ni, 3.4% Cu, 0.82g/t Pt and 0.78g/t Pd.  These are excellent grades associated with a massive sulphide zone where minerals have concentrated.  Most companies would be very pleased with this intercept, but GGI has led investors to believe that this is the second coming of Voisey's Bay and it will take a lot more than an intercept 4.8m thick to define a world class nickel deposit (>100Mt of 1% Ni).  So, GGI did what any good, promotional mining company would do and highlighted a broader interval of 48.2m grading 1.1% Ni, 0.69% Cu, 0.38g/t Pt and 0.23g/t Pd.  That looks like a respectable interval, but the very helpful Drill Hole Interval Calculator at corebox.net reveals that the 43.2m interval above the massive sulphide lens only grades 0.425% Ni, 0.39% Cu, 0.33g/t Pt and 0.17g/t Pd (link).  That is low grade disseminated sulphide material worth less than US$100/t that is only likely to be economic if the project has sufficient scale and if metallurgical recoveries are high enough.

I suspect GGI management figured that the 4.8m massive sulphide interval in EL17-04 wasn't going to live up to the hype, so the news release highlighted hole EL17-14 because it intersected 16.7m of massive sulphides.  Yup, it took seven weeks go get assay results for the first four holes and yet the company is already trying to put the focus on a drill hole 10 holes ahead, the assays for which are likely two months away.  Good disclosure practices mean nothing to this company and shareholders are culpable for fueling this behaviour.  GGI shares have sold off hard this morning, dropping as much as 30%, as investors sell the news.  When you over promote or over promise, this is what tends to happen.  The company tried to keep the excitement going by talking about hole EL17-14, but clearly investors aren't falling for that based on today's selling.

While I don't like the games associated with over promotion, GGI demonstrates why this is so prevalent in the junior mining space.  The company certainly has attracted a lot of attention, early investors/speculators have made great returns even with today's share price pullback, and GGI has raised $16M without releasing a single drill hole.  In the long run, however, these plays tend to fizzle out; the reason they call discoveries like Voisey's Bay world class discoveries is that there are so few of them.  Nonetheless, GGI has shown us that it a very profitable trade can be to buy on initial discovery news, even in the absence of assays, and then to sell before or on the news.  Hit me up if you spot the next discovery...I'll buy stock and then criticize as I'm making money.