Garibaldi answers some questions and jumps another 33%

Garibaldi Resources (TSXV:GGI) issued a news release this morning that answered some of my questions in yesterday's post.  They've now drilled an additional 11 holes since EL-17-01 (3,000m in total) and all of those holes have intersected "broad sections of disseminated to blebby net textures sulphides (pyrrhotite-pentlandite-chalcopyrite), hosted in olivine gabbro".

To the company's credit, they have also posted more than 20 pictures of core samples from the E&L drill program and pictures showing the rugged terrain on their website (link).  I commend that kind of disclosure and transparency.  The core highlights various intercepts with massive sulphides, which should carry good nickel and copper grades.  But, the question remains how broad are the massive sulphide zones versus the disseminated sulphide zones, which may not contain enough mineralization to be economic.  So, while I appreciate the additional information from the company, on the assay results will start to provide a true sense of what Garibaldi has discovered.  Today's news release indicated that assay results will be released as they become available in the second half of this month.  In other words, we could see actual results as early as next week. 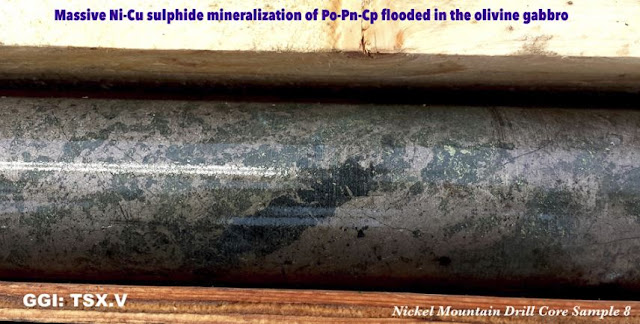 Today's release fueled excitement in GGI, with the share price closing up 33% at $3.57 with over 6 million shares traded in Canada.  The high of the day was $4.20, at which point those who bought on Wednesday would have doubled their money.  For those lucky enough to have bought a few months ago, you now have a 20-bagger without a single batch of assays results.

I've been on the sidelines watching Novo Resources, GT Gold, and Garibaldi because I prefer certainty over speculation.  However, grassroots exploration is clearly where the massive action is in the junior mining market right now.  Therefore, the next time I see a good drill result with the potential for a new discovery you can bet that I will be jumping into the action posthaste and suggest others consider doing the same!
at October 13, 2017