Nice drill results from Canada Zinc...stock happened to rise 14% before the news

Earlier today, I was wondering why CZX was up 14%.  It was a good day in the zinc space, but it was almost like somebody knew the news was coming.  Higher volume today, before the news, then on any other recent trading day in the past month.  764,502 shares traded today before the news, which was even more than the 409,400 shares traded on Sep. 15 after the last drill results were released.

Hmm, call me cynical but it almost seems like some brokers or investors at Leede Jones Gable and PI Financial knew these results were coming out based on their aggressive buying today.  They were 55% of the buy volume.  The stock also happened to rise substantially in the first half of September leading up to the last drill results news release.  I'm not saying this isn't all coincidence, but it does smell a little fishy. 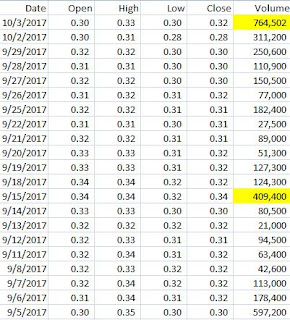