Garibaldi (TSXV:GGI) is the darling of British Columbia's Golden Triangle at the moment and we might even see some assays in the next week.  It seems like an uber speculative investment with a market cap approaching $500 million😨, but the fact that Eric Sprott continues to aggressively invest in Garibaldi suggests it may actually have a significant nickel discovery. Mr. Sprott recently invested another $5 million as part of a private placement and now controls 11.7% of GGI.  Drill results better be good or GGI (and related pump-job MTS) are going to go down faster than a peregrine falcon (random fact: peregrines can achieve speeds of 320km/h in its hunting dives).

GT Gold (TSXV:GTT) illustrates what can happen to hot exploration stocks when results start to disappoint.  That stock is now 60% off its highs, even though the company's latest news release included the statement "Possibly the best is yet to come." (link) 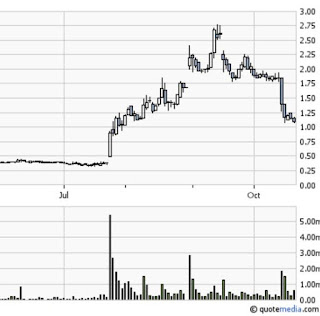 I don't feel sorry for whoever the sucker was that paid $2.75/share for GTT.  Serves you right for being dumb enough to think that the company was worth $200 million based on a few drill holes.  These are the lottery tickets that I referred to in an earlier blog post.  You might get lucky and hit the jackpot with a stock like GTT (or GGI...or NVO), but the odds are against it when the valuation gets out of whack with reality.  When stocks like these shoot up, they become a high risk, low reward situation and that is not a smart investment strategy.  More often than not, they turn out like GT Gold, Cordoba Minerals, etc. etc.

Another company in the Golden Triangle that I recently took a look at is Dolly Varden Silver Corporation (TSXV:DV).  I'd classify DV as a low to medium risk, high reward situation.  Here are the reasons why:

Let me elaborate on that last point.  On August 14, 2017, Dolly Varden announced a new discovery with hole DV17-058 intersecting 16.1 metres grading 293 g/t silver equivalent in an area 200 metres north of the Torbrit deposit. The stock popped on the news, but then gave back all of the gains.  This might have been because the headlines focused on a broader intercept that included some grade smearing.  The true width of the better portion of the intercept was only 6.27 metres grading 481.1 g/t Ag .  So, hole 58 did make a new discovery with a decent intercept, but the company lost credibility in my eyes by highlighting the core length in the news release headline and smearing grade.  The company redeemed itself in the August 29, 2017, news release (link), by highlighting 6.72 metres of true width grading 1,272 g/t silver equivalent in hole DV17-63 in the new zone identified by hole 58.  The best intercept in that hole was actually 10.05 metres grading 852.2 g/t silver (929.4 g/t AgEq) in VMS style mineralization 427.85 metres down hole.  That is a very nice grade intercept, both in terms of grade and width.  If there is continuity of this mineralization, it could have a significant impact on Dolly Varden's total silver resource.  I would expect the company to drill follow up holes this year, as the drill program was expanded in late September to 12,000 metres from 5,000 metres.

Dolly Varden's stock went up by almost 20% on the back of hole 63.  But once again, it has given back all of the gains and is now trading back in the low $0.60s.  Any further share price weakness will make DV quite attractive as a value Golden Triangle play.  Downside risk is reasonably low due to the existence of an actual resource, as well as interest expressed by Hecla.  If planned drilling in the area north of Torbrit hits more mineralization like hole 63, then this stock has the potential to trade up substantially from its current valuation to reflect the size of the discovery.  Safe and boring, but I'm OK with that.